Detectives in hard-boiled crime fiction are as tough as they come. The genre is thematically quite distinct from noir, not just in the respective decades of their greatest prominence. Noir crime tales are to do with perpetually grey individuals, about personality types and interactions which blend the bleak with the cheerfully cynical, with very few illusions about human nature. The genre’s greatest period, the late 1940s and ‘50s, mirrored existential questions in American society, with the beginning of the Cold War and the McCarthy era’s general paranoia.

Hard-boiled fiction’s three greatest writers, by general consensus, are Dashiell Hammett, James M Cain and Raymond Chandler, of which the first two are qualitatively far superior to the third. The genre has survived and even prospered in the decades since — favourite hard-boiled characters from later years include Donald Westlake’s Parker, Mickey Spillane’s Mike Hammer, Robert B Parker’s Jesse Stone and Sunny Randall and the wonderful Raylan Givens by Elmore Leonard.

But the greatest hard-boiled characters are from the Depression Era. Unlike noir, hard-boiled crime stories are about a certain type of person taking on a thoroughly corrupt establishment, including civic bodies, the police, federal agencies, big business and journalists. The stories reflect society’s cynicism about structural solutions to their problems. So the solution had to 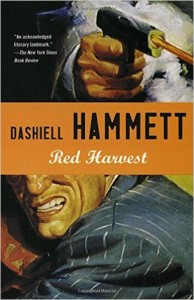 come from the proverbial outsider, a one-man response to corruption and failing institutions. And the protagonist had to be tough, perhaps even supernaturally so.

Of the early hard-boiled characters, the greatest, and the archetype, is the Continental Op, created by Dashiell Hammett. He works for the Continental Detective Agency, and we never get to know his real name. He is the actual ‘Man with No Name’ long before Eastwood (indeed, the latter’s character in A Fistful of Dollars, and the plot, are derived from the Op’s adventures). So he uses aliases everywhere. With this comes a chameleon-like ability to adapt to changing circumstances.

The Op listens to his boss, ‘The Old Man’, and uses his wits to solve problems as they come up, but at his core his experiences with humans and with compromised institutions have left him completely cynical and detached from the follies and foibles of mankind. He has no expectations of nobility from humans, and is sometimes surprised to find there are actually good people around. He also has a sense of irony, frequently manipulating the bad guys into neutralising one another to arrive at his own idea of justice.

On the move after his quarry, the Op is pretty much unstoppable, a force of nature, and always gets the job done, and then some more. Solving cases becomes secondary to fixing the system as he sees it, even if sometimes the Old Man disapproves.

The Op’s greatest story is Red Harvest, where he turns up in the town of Personville, called ‘Poisonville’ by many, perhaps as a mispronunciation. But the moniker is apt, because Poisonville has nothing good to recommend either to visitors or residents: a town whose institutions, and leading citizens, are thoroughly compromised. So when ‘the last honest man’ in town is murdered, and the Op finds himself in the thick of things, he decides to take on the whole town and fix things his way. As with the Op, so with the story: Red Harvest is the archetypical hard-boiled tale, and among the greatest crime novels ever written.

Hammett is unarguably the greatest noir and hard-boiled writer of them all, and many of his characters and plots became templates for later writers. Sam Spade and the highly-recommended private eye couple Nick and Nora Charles (The Thin Man) are prototypes for both genres, mainly tending towards noir. But the Op is a masterwork in character creation, and reinforces Hammett’s literary significance.

The Op has been hugely influential across literature and cinema in the years afterwards. There is an opinion that Kurosawa’s Yojimbo is a more than subtle nod to Red Harvest, although Kurosawa himself credited Hammett’s The Glass Key. But in terms of character, Sanjuro in Yojimbo is closer to the Op than to Ned Beaumont in The Glass Key. Besides, regardless of Eastwood’s ‘Man with No Name’, Toshiro Mifune’s Sanjuro is the closest any cinematic character has come to capturing the nuances of the Op’s character.

Hard-boiled plots frequently verge on the noir, and the greatest noir detectives are often close to the hard-boiled archetype. But never mind the Philip Marlowes and the Sam Spades. The Continental Op is the greatest of them all. And if you don’t agree, the Op will just shrug it off and walk away to have a drink. Pissing contests are not his line. Solving problems, and tearing down structures and demolishing people he doesn’t like, is. And he is the best at it.