Ladies and gentlemen, our next exhibit in the newsroom menagerie is the Echeneidae, a family of fish better known as the remora. An interesting fish it is, and I warmly recommend you to study it in some detail. The remora comes with suckers atop its head, by which it latches on to bigger organisms and derives sustenance from them. This sort of relationship is called commensalism in zoology. The larger organism derives neither benefit nor harm from the remora.

The average newsroom tends to have a large number of people with artistic, academic or intellectual inclinations. Several have genuine academic heft, and produce, sometimes in arcane fields, admirable scholarly works. Others write non-fiction, some very well-researched, either on current events or on subjects that bridge the newsroom-academia divide. Both types, as I have seen from personal experience, try their best to reconcile the everyday demands of the newsroom with their respective interests and pursuits. I am very fond of them, but they are rare, and tend to vanish from the newsroom quickly and go somewhere else.

The remora in the newsroom does not belong to these two categories. You will find him usually towards the top of the pecking order. Unlike the snark, you can’t ‘threaten his life with a railway-share’, because he has done well, financially, thank you very much. The remora considers himself an intellectual by virtue of having done well in the newsroom. It is a matter of ticking boxes for him. Top of the pecking order — check. Therefore, scholarship — check. Therefore, books — check.

The remora, you see, makes the error of equating an interest in words with an ability to write books, or even tell stories. The error of equating professional success with artistic merit, or proof of latent creative ability. A harmless inference, you may say. Print journalism is mainly to 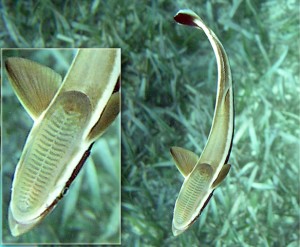 do with words, after all. But there is a considerable difference in the contexts in which words are used. We know so many who are very well-read and have a remarkable vocabulary. Their minds are inclined towards the nature and combinations of letters and words. You can’t beat them at Scrabble any day of the week. But they may not be very good writers.

Yet others may have a considerable amount of independently-derived ideas, or gleanings from several afternoons with Messieurs Camus and Foucault. But they might not be good storytellers. These are disciplines which require different kinds of skill-sets and temperaments. An accountant and an applied mathematician both deal in numbers, but we can’t confuse one for the other. Nor can every competent graphic designer be an abstract artist.

The remora, however, does not make this connection, perhaps because it has not occurred to him, which in turn indicates a somewhat defective capacity for reasoning. Or perhaps the argument I mentioned above is incorrect, and the remora is right in believing he has merit. So he writes his book, and this is where the commensalism bit comes in. With the accumulated power of the newsroom, he can now get the book published, because people know him well. Successful man, must be creative too. He thus channelizes the power of the organization, and his place in the pecking order, to tick another box. This is classic commensalism.

Let us consider a hypothetical scenario. Suppose I write a small book of my own, perhaps a humble novel. Very kicked about it, I then hawk the MS around town, perhaps standing in line at a publisher or two, perhaps hoping somebody would find some merit in the work, and give me a chance. Scores of people live in hope this way. Some get a chance, others, perhaps not. But the remora, he goes straight to the top, and his book comes out. Once again commensalism kicks in, and there is no end of gushing admirers to vindicate his view about the merit of the book. Perhaps the book does have merit. But the playing field, for the people lined up outside the publisher’s, is not equal. So here we have commensalism and class working very well together.

Now, armed with the book, and the vindication, the remora is in a comfortable place indeed, to sit in judgment of others, perhaps even in the newsroom. Now his vindication of others’ tastes or ideas matters. It has always mattered, within the newsroom, but now he has the book to back him up. Now it becomes necessary to seek his intellectual approval, and perhaps engage in intellectual discussions with him. And thus the newsroom carries on.

‘Remora’ in Latin means ‘delay’, because the fish is supposed to act as a hindrance to large vessels. In the world outside the newsroom, the remora is mainly used by fishermen to lure tortoises. So I suppose that is what the remora is, in the larger scheme of things.

And by observing him, one learns a lot about the world and the ways of humans.