Eons ago, I was standing one morning in front of the smallest lending library I have ever seen — a covered cart with second-books both known and highly obscure. I found a fat little battered book with a cover that had once been black. That book was ‘Nightworld’, by F Paul Wilson.

I borrowed and read it, liked it a lot, and returned it. The occasional well-written post-apocalyptic novel apart, it is interesting how few good fiction works exist on apocalypses themselves. Possibly because it is difficult to get right: the magnitude of social collapse; the individual stories; the reasons for the end of the world. Much easier to pick up the pieces and tell a story of the aftermath.

‘Nightworld’ is about the apocalypse, spread over a week or so. It begins with the sun rising late and setting early, progressively, till there is no dawn. Meanwhile giant sinkholes open up across the planet and monstrosities come out from another dimension. The fellow to blame, it turns out, is this millennia-old villain allied with the other dimension, part of an ancient feud between two cosmic entities. Opposing the bad guy is a small bunch of people with little in common and they are among the many delights of this book. One of them is a fellow called Jack.

A few years later, just before leaving the place, I found the book again and bought it. ‘Nightworld’ is the culmination of the six-volume ‘Adversary Cycle’, with characters’ backstories tying in, all of which I had to read. That began nine years of me looking in at bookstores across the country for the other five books. Turns out nobody had read Wilson, and no 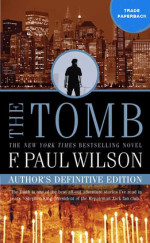 body stocked the books. Ever. This was much before e-tail, and I was stuck.

When I met Jack in ‘Nightworld’, I immediately thought what a wonderful series there could be about him. Jack is what his creator describes as an urban mercenary. He takes up jobs for people who do not or cannot take the help of the police. He calls them ‘fix-its’. But more than the actual jobs, its Jack’s life that makes him such a fascinating creation.

Turns out I was right. In the early days of the internet, a small fan site came up for Wilson readers (obviously the Adversary Cycle was a huge hit in the west) and they could not have enough of Jack. Wilson over the years would write 16 Jack novels, a trilogy about his early years, and a YA trilogy on Jack as a teen. Chronologically, ‘Nightworld’ is the last Jack story. We still haven’t had enough of him, but Wilson says that’s it, and we should stop bothering him.

In the ninth year of my search I found ‘The Haunted Air’, and with the coming of e-tail, at last, ‘The Tomb’, the first Jack novel. It remains my favourite horror story, but it is much more than that. Wilson, a doctor whose knowledge of classic horror novels and movies, crime fiction, popular culture and mythology is phenomenal, is also a fine writer and a delight when it comes to discovering New York. In his hands the city is a colourful character with a bottomless bag of tales.

And there is Jack. The Repairman, as his best friend calls him, is a complex piece of work. We are never told his true last name, and he lives outside the margins so adroitly that it is a delight to see him maneouvre around systems and laws. He has no social security number or official existence, deals mainly with cash, buys pop culture junk which he calls ‘cool things’, matches Wilson’s knowledge of classic movies and is physically capable (which of course is needed in his line of work).

I first met him when I was gradually easing myself out of systems, and could appreciate where he was coming from. His fans may not have dropped off the map as completely as he has, but one understands his views. To call him a libertarian would be simplistic. He just doesn’t want the government to butt in where it is not wanted. For instance, he believes it is a citizen’s right to do whatever she likes to her own body. If one does not want to poison oneself, one will not do drugs (he doesn’t, incidentally). The choice is one’s own.

The books’ highpoints are where Jack, the ultimate invisible man, comes up against forces working against humans. The two cosmic entities mentioned above are another of Wilson’s wonderful creations. Unlike established theologies, however, one of the entities is pure evil and wants to remove sentient life from earth. The other is not necessarily our friend, but merely values humans because sentient life makes this planet a prize in their Great Game. Jack, while dealing with more mundane cases, has his runs-in with the Big Bad Guys once in a while.

All the Repairman Jack books are worth a read, but ‘The Tomb’ is really something.