Many years and extinct species ago, there was this survey on the world’s favourite animal and, wouldn’t you know, the tiger was voted number one. The dog came second. Running my eye down the top ten list I asked myself: ‘Where is the cat?’

Because the cat, children, wasn’t there.

I looked at the problem from every side and decided I would have none of it. So I collared the organisers of this so-called survey.

The conversation, I regret to say, went steadily downhill. Allegations were made (by me) of undue favours to chimpanzees (eighth) and orang-utans (ninth). On being pressed, the organisers confessed they did not exactly know what ‘favourite’ meant. Perhaps, ventured one grey-bearded fellow, it referred to charisma?

It is a fraught word, charisma. It may be taken as the difference between the clearly popular tiger and the pen-tailed shrew, a little fellow who lives on trees and subsists almost entirely on pure alcohol. Difficult to be charismatic when you are sozzled, but the shrew (I am told) doesn’t mind.

Try that with a cat. Charisma doesn’t quite cover what cats have. With a dog, you can nod and talk about the weather and so on, pass the time of the day. With cats, you have to be on your best behaviour, and as dignified as you can be, and hope for the best. You might get polite interest from them, or perhaps haughty disdain. It’s a matter of chance. Since dignity doesn’t come easily to me, I always feel, when conversing with cats, that my hair is a mess or my knees are knobbly. 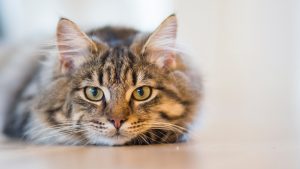 She’s just not that into you

The Prof had a cat, RK, who was particularly fastidious about the content of academic discussions. He would recline… which reminds me. Humans can’t recline. They might use the word loosely, and hopefully, to refer to a set of marginally awkward arrangements of the limbs, and dogs may sprawl as they choose, but only cats are known to recline in the proper sense of the word.

So our RK would recline on a piece of furniture at a vantage point and survey the eclectic group of visitors at the Prof’s place. He would listen impassively to the discussion, and occasionally yawn at some ill-thought out argument. Wittgenstein versus Russell moved him not. The group would feel acutely conscious of such a connoisseur, and would try to be their best, in a subdued and reverent way. RK was the litmus test of these discussions, a furry facilitator of discourses.

An author friend, meanwhile, has been graced by the presence of Toothless, a dragon who, seen under certain kinds of light, resembles a cat. Toothless has declared suzerainty over a substantial portion of the house, and is on his way to becoming an old-school conqueror.

I had, over the years, been allowed to host and be a general factotum to five cats. Mostly, they came and went, and ruled far-flung places with iron paw. Their air of majesty was so awe-inspiring that I felt like an intruding mendicant.

My dog R’s approach to cats was, regrettably, one of truculence. He refused to believe their poise and dignity was inviolable, and there existed a permanent state of war in the garden and the neighbourhood. On various occasions he succeeded in treeing some feline visitors who would, on getting the high ground, hiss epithets at him. R however claimed victory on these occasions and vested on himself the (additional) title of ‘Confounder of Cats’.

One autumn morning, on a walk in the neighbourhood, R and I spotted a striped and portly fellow coming up the lane. Battle-cries were uttered, insults were traded and the face-off ended with the cat making it up a nearby tree in record time. I was impressed with the speed and agility of such a rotund one.

So I stood under that tree and applauded, while the cat began a long and complex story on the theme of ‘Defiance to Dogs’.

‘Haw, you fantastically flexible feline!’ said I. ‘You majestic and magnificent mouser! You robust rat-rousting raconteur! You miaowing milk-maniac! You weirdly wonderful whiskered wizard! You frolicsome fish fanatic! Truly you are a delight and a marvel to behold. I humbly apologise for my friend’s behavior. He knows not the rules of civilised people.’

The cat didn’t care. R, who I eventually convinced into leaving the theatre of conflict, said I was a disgrace.

Sometime around 3200 BCE, the Egyptians, for reasons best known to them, began cat worship in a serious way, and I do not blame them. The cat-headed Bast was a genial goddess (‘genial’ in Ancient Egypt being ‘eye-skeweringly hardcore’) and her cult was very popular. Worshippers probably told her: ‘Please have these offerings of milk and Whiskas, it was the best I could do. Please?’ Prayers to her were probably haughtily ignored.

Tolkien’s cat, in the poem ‘Cat’, may think of his distant predator ancestors in the forest, and TS Eliot’s Mungojerrie and Griddlebone may contemplate their secret names, or Macavity, that Napoleon of crime, may work on the next dastardly plot, but the fact is we just don’t know what a cat is thinking about. What we can be certain of is the cat is not speculating about us. It has better things to do.

And therein lies the answer to my question about the survey. ‘Charisma’ doesn’t cut it. Because the cat, children, didn’t care about any survey, and just didn’t turn up.

(Note: I must mention here that I have nothing against tigers, chimpanzees, snakes or orang-utans. They are all respectable fellows. I hesitate to claim that I have actually seen an orang-utan in the flesh. I once went to a zoo and saw a creature which my class teacher assured me was an orang-utan, but I have my doubts. It could have been a small fellow in a suit paid by the hour.)