(This is the first of the Mobile Tales series. I have a small collection of miniature classic cars and aircraft, and these are their stories, written on MS Word on my phone. I have tried to preserve a sense of time and geography in the words, sentence structures and slang used in each tale.)

It was a heck of a time, as the 1933 Ford Coupe keeps reminding everyone, all the young fellows with their shiny chrome and wingtips and whatnot, and the posh Europeans with their sleek sophistication. They don’t really ever have the heart to stop the salty old-timer in his cups.

Yes, a heck of a time, between the two wars. The Coupe was the meanest, toughest thing out on the road, and could roar on, from county to town, hours over hours. The cops loved him, and in time the bad guys did too.

Oh, and there were so many of them back then, the wrong ‘uns, the old-timey gunboys, the Tommy gunners and bank robbers, the liquor smugglers on the old cross-border run to Chicago. The desperadoes on the lam. What a time! 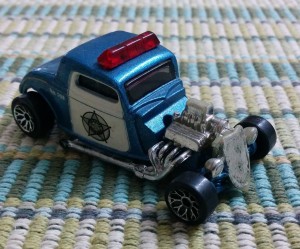 There was Baby-Face Nelson, and Dillinger, and Ma Barker and her kid, and Bonnie and Clyde, and Pretty Boy Floyd and Machine Gun Kelly and hoo, boy! Ain’t never seen their likes again, says the Coupe.

And there was the Mob, too. The wiseguys, mafia you youngsters call them now. Al Capone himself, and all them guys who made money during the Prohibition.

And the broads. Every one of them like the girls in Hollywood. The broads were something, too.

The Coupe worked for some Chicago cops for a while, and saw a lot of chases. Even got dinged in the hood by a Tommy gunner once. Then was sold to some guys who ran a crew for Capone near the Exchequer restaurant. Saw Big Al himself, and gave a lift to Machine Gun Kelly once.

By and by, getting on in years, the Coupe was sold down south and became a sheriff’s car. Enforced the law in that there county, the Coupe did. Not a criminal could get away. The great Melvin Purvis hisself sat in the back once. A great man. A great one.

So the Coupe remembers, and there isn’t a one among the youngsters as salty and as full of life. Anyone who survived the Depression can take anything any other decade can throw at it.