There never was a math as poly

His mien grave, his accent mysterious

(But cruel voices hiss ‘Another Pistorius!’)

Pay no heed, the calumny is old,

A diplomat, writer, now a historian,

Observe him on stage, waving to acolytes,

So far along the curve you can barely keep up

On Shashi’s ideas the Right doth trip up.

Master of mots, both bon and juste,

Rivals quail, and fail, and bite the dust.

His typos send us to dictionaries in vain.

Do you have a cause, unchampioned but dear?

He’s the man, parachuting in without fear.

A Bill should do it (but the Act will be stuck!)

But brownie points were there to pluck,

And a wedding proposal, also some humour,

But further progress is just a rumour;

Ideological windmills of number without reckon.

Reparations he seeks, and a sorry, to boot,

Their guilt the Brits have repeatedly shown

(‘But Shashi’s forgotten the Peacock Throne!’)

The Persians, Burmese, Afghans and Turks

Are aghast: ‘He ignored our genocidal works!’

But Tharoor dreams only of ‘mea culpa’ from Clive;

Jewel with a conscience of the Stephenian Crown.

We’ve had many PMs, to our great misfortune,

Statesmen and dictators, to realities immune;

To ‘entire pol science’, from a quiet economist

Now Tharoor, they say, will take ‘em to the stars;

In which case, goodbye, I’m leaving for Mars.

That’s where I’d wanted to end my verse;

But wait, there is something much worse,

If NaMo to RCR did ever proceed;

It happened, I was stuck in durance vile —

An exit strategy was never my style.

So here is an idea, my last play,

And Tharoor can take or toss it away:

But parachute politics I may just ignore,

Get a ‘sorry’ from the Mongols, on a contrite note,

And, Chetta, you may (probably) get my vote.

I have usually travelled alone, the erratic behaviour of my early companions on the road convincing me this was the better option. But a fellow-traveller on some journeys, particularly in explorations of eastern Bhutan, has been Matsuo Basho. In India, where I mainly journeyed by night and saw the sights by day, taking a book along appeared superfluous. But amid the clamour that any day on the road in the sub-continent brings, Basho can be a quiet voice of wonder and calmness, a voice delighting in the joy of discovery.

Basho was born to a bushi family of the then Iga province in central-eastern Honshu in 1644. With his master Todo Yoshitada, he began, as a child, to compose renka, a form of collaborative poetry in which individual verse components, called hokku, by alternating creators, could be linked into longer sequences. Individual hokkus would by the 19th century be called haiku. The 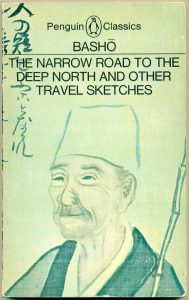 way of the warrior, then, was not his calling (although prominent bushi have created notable hokku).

By his 30s, Basho’s poetry was famous in the land. But celebrity pushed him inward, and he turned to Zen meditation. In 1683, after two successive tragedies including the death of his mother, Basho set out on the first of his travels, to the foothills of Fuji.

‘I set out on a journey of a thousand leagues, packing no provisions. I leaned on the staff of an ancient who, it is said, entered into nothingness under the midnight moon,’ writes Basho in Nozarashi kiko (The Record of a Weather-exposed Skeleton), the journal that resulted from this travel.

In seeking the road, Basho sees himself on the footsteps of Buddhist and Confucian spiritual forebears, but does not find the philosophies adequate to the real world. He finds an abandoned baby on the way, and offers it some food, speculating on whether its parents hated it. Then he concludes: ‘This simply is from heaven, and you can only grieve over your fate.’ He chooses not to find solace in the Buddhist notion of the karmic cycle.

By the time he returned, Basho was determined to be back on the road as soon as possible:

‘Another year is gone

A traveller’s shade on my head,

Straw sandals on my feet.’

Back at home, Basho wrote what is considered his most famous hokku:

A frog jumps in —

The splash of water.’

Apparently, the verse was so influential that it triggered a rash of frog-themed hokkus by other noted poets and by his disciples, who numbered in the dozens by then. And there is hardly a modern haiku writer who hasn’t made one on frogs. Back in the day, I remember writing one, too.

Basho, meanwhile, chafed at this further celebrity, and couldn’t wait to get away. He would make four more journeys, venturing up the length of Honshu, always looking for new roads. These resulted in journals like Oi no kobumi (Account of a Travel-Worn Satchel) and Kashima mode (Pilgrimage to Kashima Shrine).

In May of 1689, Basho left Edo (now Tokyo) again, accompanied by a student. Over five months, on foot as always, Basho journeyed to Ogaki, a distance of 380 km, but which must have been considerably longer because of his meandering route. The result would be Oku no hosomichi (The Narrow Road to the Deep North), his greatest work.

The hokku format, with the 5-7-5 syllabic structure, permits poets to use ideograms in original, innovative ways. Even though a lot of the fluidity of the Japanese ideograms’ arrangement is lost in translation into alphabet-based languages, some of the fluidity, particularly of the greats like Basho, is still retained.

The journal records his travel to various shrines he had heard of, and been meaning to visit. But it is also about his observations on human nature, on the seasons, and the local legends he hears along the way, and his impressions of the weather, and conversations with himself. The overall result is Oku no hosomichi is a long quiet conversation Basho has with himself while resolutely walking down country paths. The effect can be deeply calming. At the town of Sukagawa, thinking about a recent, particularly difficult stretch, he writes:

A song for planting rice

In the deep far north.’

At a place called Maruyama, Basho visits what used to be the mansion of a noted lord, Sato Shoji, and takes a look at the family cemetery. He remarks on the tombstones of two women ‘who left behind them such a name for courage. My sleeve was wet with tears. You do not have to go so very far away to find a tombstone that makes you weep.’

But Basho on the road is no mere philosopher on being and nothingness. Local traditions, myths and even the quaintness of names in the countryside are fodder for his hokkus. On crossing the villages of Minowa (raincoat) and Kasajima (umbrella) during a heavy shower, Basho quickly writes, tongue firmly in cheek:

Rain-Hat isle? How far along

Elsewhere, he sees great beauty in the everyday, and in small gestures. At the town of Sendai, his host, an artist, gives him straw sandals with straps painted blue, like an iris. Therefore:

‘I will bind iris

Blossoms round about my feet —

Straps for my sandals.’

Basho’s sleeve comes to his aid frequently when he is overwhelmed by emotions. After visiting a pilgrimage site at a place called Three Mountains, and being asked to write about his experience:

‘I cannot speak of

Mount Yudono — yet see how

Wet my sleeve is now.’

At Kisataka, near the sea, Basho pauses a while to contemplate silence:

‘Crossing of the tides;

A crane, its long legs splashing —

Ah how cool the sea.’

By 1694, Basho had retreated further from the world, although his celebrity had only risen. After more personal tragedies, he decided to set out on yet another journey. But this time, his health failing, he could not walk on his own and had to be carried, and eventually died on the road.

Basho’s poetry and his journals are perfect companions on journeys, particularly on foot. If there is one voice you want with you to interpret the deep silences that some places still have — or the deep silences within yourself — it has to be in his writings.

About a decade ago, on a secret road in the far east of Bhutan, I sat on a rock in the middle of a valley. It was two days after I saw a clouded leopard for the first time, and I was halfway into a 40 km walk to a village where I was to put up for the night. There was a mild wind, I remember, and the end of spring, and I had just passed a small roadside shrine, with a spire painted golden. This is what I read, from Oku no hosomichi:

‘So the rains of spring

Fall and fall, yet leave untouched

This bright hall of gold.’

It was a good day. With Basho, the road is always free of burden.

(I have not used phonetic notations in the transliteration of Japanese words here. Although Basho has been translated by several scholars, the most accessible, and fluid, version of his journals is by Nobuyuki Yuasa, himself a poet and writer)