Most of my childhood was illustrated by two persons. One was Arthur Rackham. The other was Ivan Bilibin. 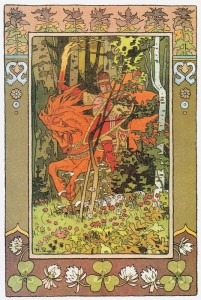 If Baba Yaga (and her chicken-legged hut) as you imagine her looks just that way, and no other, it is because of Bilibin. If Ilya of Murom in your head will always have a red shield and scabbard, it is because of Bilibin. The magical wolf that helps Prince Ivan in The Firebird, the firebird itself, Vasilisa the Fair, a long line of princes and princesses, the Three Riders, not to mention Koschei the Deathless. Every single memorable character in Slavic folktales becomes engraved in the reader’s eye because of Bilibin.

Ilya of Murom is among my favourite folktale characters, and many years after I first read of him, I was overjoyed to discover he could have been based on a real person. In Ilya’s first adventure, when he comes across Solovei the Whistler-Robber (such names they had!), the fearsome bandit asks: ‘Are you a boyar?’ and Ilya says: ‘Not a boyar. I am a bogatyr.’

Long before I understood the contextual difference between a boyar (nobleman) and a bogatyr (a knight-errant, but the term can’t be accurately translated, I am told) and long before I read anything about class struggle, Ilya became a man after my own heart. Not a boyar. A bogatyr. And Bilibin’s illustration of that fateful encounter was equally responsible for this.

His art is distinctive in its line-work, and the use of primary colours, attention to detail in architecture and clothing, even weapons. You only need to see the Red Rider bursting out of the trees: the vividness of his armour, the glow of his horse, contrasting with the leaves on the trees. Here is an artist telling a story of the human form, of an animal in motion, and of a landscape simultaneously. And scenes set indoors capture furniture, and fabric, and items of everyday use. Nobody quite drew thrones like Bilibin did, for instance. One of the reasons I like him is also why I like Herge: the distinctness of the shapes, the loyalty to form and structure, even though Bilibin’s is not ligne claire. 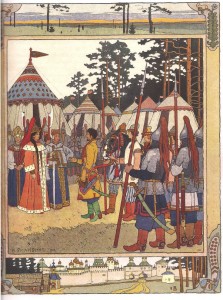 The Wedding of Maria Morevna

A lot of his illustrations have a unique touch — borders with geometrical patterns and recurring shapes, or landscapes and architectural forms. Bilibin travelled extensively in the region west of the Urals, and studied traditional Slavic peasant architecture, particularly in the deep north, forms which even in his time were dying. These styles and forms would become a part of the signature Bilibin style. A lot of Alexander Afanasyev’s excellent folktale collection, for instance, is accompanied by Bilibin’s art. Homage to him usually involves art with these borders, such as in Bill Willingham’s Return to the Homelands story arc in Fables, where the part of the adventure in the fable version of Rus takes place entirely in panels drawn after Bilibin.

After 1917, Bilibin was not quite happy with the direction revolutionary Russia had taken, so he went into exile, returning in the mid-1930s. He died at 66 during the Siege of Leningrad, in 1942.

Illustrating folktales is not just a matter of creating memorable physical representations of characters which have survived for long in the popular imagination. It is also about understanding the nature of the people who created these stories. As Jack Haney writes in his excellent The Russian Folk Tale: ‘I am convinced that he (the Russian peasant) found deep moral significance in them, something that goes deeper than the mere surface meaning attributed to him by scholars who have never experienced the totality of peasant life’.

Bilibin gets it. His ethnographic, architecture and folklore studies were part of trying to devise a visual language to explain this ‘totality’, and it comes out in each of his works, even drawings of those nameless extras that populate folktales — the maids in waiting or men-at-arms who appear and vanish in the whirl of heroic events. Consider The Wedding of Maria Morevna, and examine the spearmen and ladies in attendance. In many ways, Bilibin’s art is truer to Russian tradition than, say, his contemporaries like Viktor Vasnetsov. They both drew Ilya of Murom, for instance. Vasnetsov drew the three great bogatyrs of Slavic folklore together in fact, and what a heroic image it is: Ilya of Murom, Dobrynya Nikitich and Alyosha Popovich, surveying the landscape, possibly looking out for the next great quest.